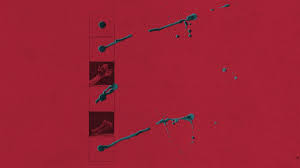 After the first noise-pop album ‘Dead To Me’ and their second sorrowful album ‘The New Life’, the third studio album by this Northern Irish alt-rock band has a much tougher and grittier sound. It’s ragged guitar sounds and deafening drums show the band’s maturing sound since their first release in 2011.

With a mix of heavy guitar sounds, soft-hearted lyrics sung by Irish born and bred Cathal Cully and an eerily disturbing drum beat, ‘Arms Around A Vision’ illustrates the variety in the sound of the band. Featuring ‘(Obsession)’ and ‘(Convalescence)’ which are simply just short instrumental tracks breaking up the onerous songs on the rest of the album. ‘Reticence’, the opening track, has a chilling beat with sharp edges and heavy guitar riffs. With a Joy Division feel to most of the album, the new release by the Belfast boys is set to be their best yet.